To share your memory on the wall of James Francis \"Jim\" Russell, sign in using one of the following options:

Jim received the Bachelor of Science degree from Seton Hall University. He also attended Fairleigh Dickinson University for Paralegal Studies. He was a proud United States Army Veteran in the Army Reserve.
His career was with the Passaic County Public Defender’s Office as the Principal Investigator. Jim was also involved in many organizations; He served as Municipal Chairman of the Rutherford Democratic Committee and Campaign Manager for Rutherford Mayor and Council candidates. Baseball coach: Rutherford Texas League and Rutherford Little League. Basketball coach; Rutherford Biddy Basketball.
Jim loved his children, his books, Classical music, his Irish heritage (Kilkenny and Clare), vacations in Ocean Grove, N.J. and his many friends and co-workers.

A Memorial Service will be held when it is safe for everyone to assemble.
Read Less

The insignias listed here may be subject to copyright and/or trademarked. Those copyrights and trademarks are owned by the respective organizations.

We encourage you to share your most beloved memories of James Francis "Jim" here, so that the family and other loved ones can always see it. You can upload cherished photographs, or share your favorite stories, and can even comment on those shared by others.

Posted Jan 15, 2021 at 04:34am
We are deeply saddened by the loss your family as encountered. May the God of all comfort help to ease the pain of your grief. Thinking of you all.
Comment Share
Share via:
TS

Posted Jan 11, 2021 at 05:55pm
Jimmy was a friend for many decades. he was a "real' friend - someone you could count on. i will miss seeing him in my yard with his newspaper and his cigar.
He will be missed. A good man. 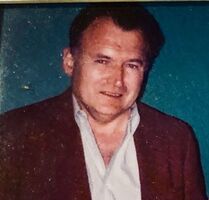